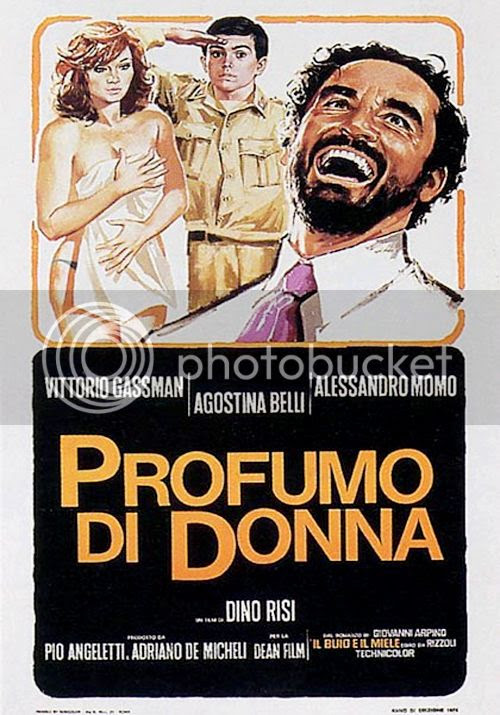 This version - the original - stars Vittorio Gassman as the blind Captain Fausto, a lecherous old goat who travels down the length of the Italian boot, drinking from his flask, heckling his minion - the resentful, boyish Giovanni (Alessandro Momo) - and sniffing the air in search of a "tall blonde with a big ass". While Giovanni huffs and sighs, Captain Fausto wields his cane like a weapon - slashing the air for obstacles or, well, passersby. As Giovanni creeps under Fausto's nose and discovers a pistol and the photo of a girl (Agostina Belli) in the latter's suitcase, their journey down to Naples begins to take on a new, ominous meaning.

While that strange combination of tenderness and raunchiness - "You think I miss seeing the Sistine Chapel?" Fausto shouts. "A big ass! That's what I miss!" - is still present in the Italian version, as is its slightly maudlin conclusion, this version also boasts a much thornier, less likable blind captain and a much frostier relationship between him and Giovanni. The relatively prudish American version - with Al Pacino as the Captain Fausto (now "Frank") and Chris O'Donnell as the Giovanni (now "Charlie") - emphasized the captain's disability as a strange sort of wild wisdom. Through Al Pacino's "HOOAH!"-ing, his classy tango dancing (just to compare, the same scene in the Italian version had Fausto tongue kissing Giovanni's girlfriend and calling her a "whore") and his general vitality, the anemic preppie Chris O'Donnell learns via the rascally blind man to live life to the fullest. Blah blah.

Fausto's quality of societal jester - i.e. his disability places him outside of society's "norm" bounds, and so he is free to break rules and thereby comment on them - is much harsher. And indeed, his hypersexuality, heavy drinking and unvarnished cruelty (think House) seem more like the desperate acts of a very angry man rather than the gentle insights into "really seeing" the world around you. That's not to say the Italian Fausto is any less a Trungpa Rinpoche-style holy fool than the American Frank. Indeed, there's a stunning scene when Fausto asks his priest cousin to bless him - his cousin then admits that he actually envies Fausto his blindness, since that "constant suffering" affords him special status in the eyes of God. He likens him to "the stupid, the ill, the innocent children".

Kind of patronizing, we thought. And kind of interesting, since the entire movie builds up this holy (tom) foolery and then offers that foolery's pearl of wisdom: that life is essentially meaningless suffering, whether you can see or not. Rather than rebelling against that suffering, once Fausto resigns himself to his complete vulnerability (emphasized ghoulishly via a clumsy, exaggerated fall) does he seem to get peace. He stops resisting. (And remember that Faust is the guy who, for ambition and knowledge and worldly stuff, exchanged any chance of everlasting peace with the devil. So this sentimental finale basically unFausts Faust.) Frank's message (apart from "HOOAH!"; did we mention we love that phrase? HOOAH!) seems to be much less existential nothingness and much more "Carpe diem!". Much less Italian, much more American.

Vittorio Gassman disappeared into this role; we could barely recognize him going all Dionysian and such when we knew him so well as a fallen bourgeois. Alessandro Momo and Agostina Belli didn't really register, both were too generically young and pretty. The priest cousin - whoever that actor was - did a great job, but he also had a great scene. Director Dino Risi used light interestingly; often blinding us or filming things in deep shade or at twilight. Great commentary on Italian regionalism, as always (the first scene in Rome has a moped driver scoot by screaming the stereotypical local slang, "Aoh! Ma va' a mori' ammazzato!" ("Go die in a homicide!")).

Posted by a ppcc representative at 18:41