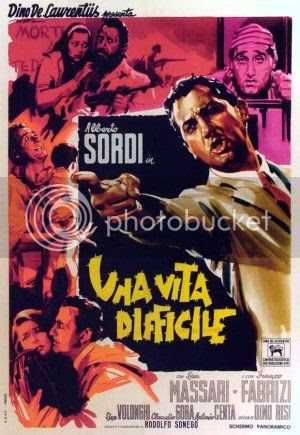 Una vita difficile (A difficult life) is the frustrating, Odyssean tale of Silvio Magnozzi (Alberto Sordi) as he navigates the post-war Italian landscape, trying to balance his partisan ideals against the harsh pragmatism that the poverty-stricken surroundings engender.

Essentially covering the same ground as C'eravamo tanto amati (which we much preferred), Una vita difficile starts with the same nostalgic romance of partisan fighting in WW2. Silvio, suffering from bronchitis as he treks through the Lake Como countryside, narrowly escapes being shot by a Nazi when Elena (Lea Massari), a local girl, kills the Nazi with her iron (whoa). Thus follows their brief three-month affair, after which Silvio flees to join his partisan band and, once the war ends, moves back down to Rome to pick up his pre-war journalism job for a left-wing daily.

A work trip up north reunites Silvio and Elena, who decide to get married. They return to Rome, where they live in borderline starvation. A son is born. Silvio is offered a position which contrasts with his left-wing morals; he refuses. Eventually, his unrestrained idealism lands him in jail, and Elena takes their son back up north.

This basic tension - Silvio's ideals versus cynical reality (often embodied by Elena); the poor, proletarian South of Silvio versus the bourgeois, industrialized North of Elena - is played out throughout the film in a variety of ways.

And all of this stuff was covered in the later, better C'eravamo tanto amati. Certain scenes - the happy crowds following Rome's liberation, the working-class trattorie with the wandering trumpet player - are even identical. Yet while Una vita difficile seems as well-remembered as C'eravamo tanto amati, we prefer the latter. It approaches the same subject with greater grace and more equanimity. Silvio's inability to let go of his idealism (and his indignant righteousness), to the point of driving away his family, is akin to Professor Palumbo's extremes - except Palumbo is articulate, off-kilter, hilarious and a sympathetic caricature. Silvio, instead, alienated us: he seemed an unlikable combination of entitlement and self-pity.

Of course, despite the identical setting, it's a harsher version of the same world that these characters live in, compared to C'eravamo tanto amati. Compare the trattoria scenes: in C'eravamo, the characters struggle by with half-portions, in Vita, they can't even pay for anything and are kicked to the curb. The requisite sell-out scenes, when Silvio succumbs to becoming a vile commendatore's underling, are full of humiliation and corruption. This extreme view just cements Silvio's righteousness, but it doesn't tackle the real issue: what if selling out does lead to a better life? The character of Gianni from C'eravamo also sells out, but his trials and tribulations are largely existential: materially, he is comfortable and happy.

Another reason we didn't particularly enjoy this film is that here, the treatment of women is just terrible. Elena, for however objectively rational and selfless she is (when Silvio implodes, she finds a way to provide a comfortable life for their son), is presented as unimaginative and frosty because she doesn't "get" the cause. Silvio abuses her regularly and, when she leaves him, she is presented as having "abandoned" him.

One of the reasons we love Lina Wertmuller's films so much is that she takes these stereotypes of Italian sexual mores - the frosty northern girl, the lusty southern man - and completely subverts them, most often via Giancarlo Giannini playing an extreme version of southern machismo. Consider, for example, Swept Away, where another left-wing, poverty-stricken southerner humiliates and dominates a bourgeois Milanese ice queen. In Swept Away, that relationship is presented as fundamentally ridiculous: compelling in its absurdity, ultimately false. Una vita difficile, maybe because it was made almost fifteen years earlier, is still earnestly enamored with Silvio's status as a man, from Rome, who is poor.

This is not to say this film isn't good. It's considered a classic, and it is indeed very well-made. The scene when the starving Silvio and Elena are invited into a royal lady's house for dinner while the republic/monarchy referendum results are announced was surreal and powerful, akin to the "lifestyles of the strange and wealthy" scenes from La dolce vita or Signore & signori. It's not a bad film, from a technical point of view. We just don't agree with its underlying philosophy. As the other northern beauty says to the other left-wing Roman in C'eravamo, "You're the first likable Roman that I meet." 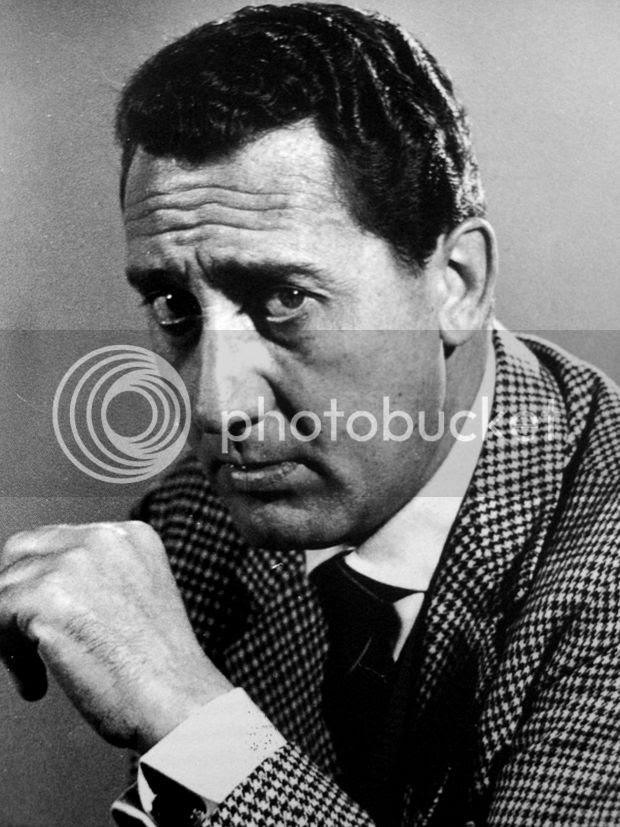 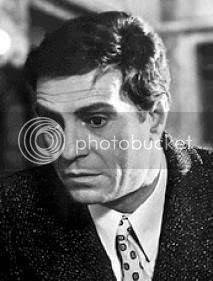 That being Nino Manfredi, who is indeed very likable and who we'll take over Alberto Sordi any day.

Posted by a ppcc representative at 17:21

Alberto Sordi is no likeable as a character actor? are you mad?? Dreaming of the Medicis and a house in Tuscany by any chance? Rubbish.

Yeah I feel like you didn't really understand the context of the film, the tongue in cheek manner of pretty much all of Silvio's behavior, or even the geography of Italy. A guy from Rome is never considered a southerner. That's reserved for darker skinned Italians from places like Naples and Sicily. If anything, Elena would be considered more of the proletarian hick for being from a small town and having no education. Remember, Silvio was a university student when he joined the army. If anything he would be more of a bourgeois type guy choosing to live the life of the working class. Not to mention he was from Rome which was seen by the rest of Italy as being the ideal because it's where everything happened. People from small towns like Elena would absolutely see a guy from Rome as a good catch regardless of how he presented himself. At least back then.

I also don't see what the point of spending a lot of your review comparing it to "We All Loved Each Other So Much." Yes that's a wonderful film but as you said, it had a lot of similar scenes to this film and yet you seem to gloss over the fact that this probably means it stole those scenes from "A Difficult Life." Or it could mean that in fact those kinds of things actually happened in that period in Italy. Either way, these are two different films dealing with similar periods in Italy but that's kind of where the similarity ends. I feel like if you're reviewing a movie you should stick to that movie's attributes instead of discussing how you liked another movie more. To make a comparison to films you know a lot about; there's an awful lot of similarity in the masala movies of the 70s (even down to using the same actors over and over), but that doesn't mean they don't all have value in their own way.

Instead of focusing on the satirical nature of the film, it seems like you got bogged down in Silvio's bad behavior as though anyone would really behave like this in real life and not have his ass kicked repeatedly. This is why this film is a classic of Commedia all'italiana. Dino Risi has said that none of the things in this film are meant to be taken seriously. Everything was exaggerated for comedic effect. Getting irritated by Silvio's behavior is like hating Steve Martin for acting like such a jerk in "The Jerk." That's what's funny about it!

The suggestion you made that selling out may actually enrich your life is made very clear in the film again and again and also what makes Silvio's actions so ridiculous. Of COURSE selling out will make your life better. Otherwise nobody would do it. Silvio keeps running across people who have nice cars and his protests against their selling out seem to get more halfhearted as the film goes on. Eventually, he realizes everything he could have had if he had compromised a bit. It's the scene when he's sitting with his son trying to explain why he didn't take the job the rich guy offered. The camera is tight on Alberto Sordi as he gets a look of utter sadness and loss on his face. It's the moment in the film when Silvio reaches a turning point.

I was surprised you mentioned none of these things in your review so I'm guessing maybe your experience with Italian neo-realism isn't that extensive or you just hated the movie so much you didn't watch as closely as you might have. To each his own. Your observation that the film was well-made as though this was the reason it's considered a classic is missing the point. Most of the Italian neo-realist films were well made because Cinecitta was a very well-funded studio that attracted famous actors and directors from all over the world. It was like the Bollywood of Europe during this period. Maybe read up on the film a bit more and go back and watch again. There is a lot you seem to have missed.