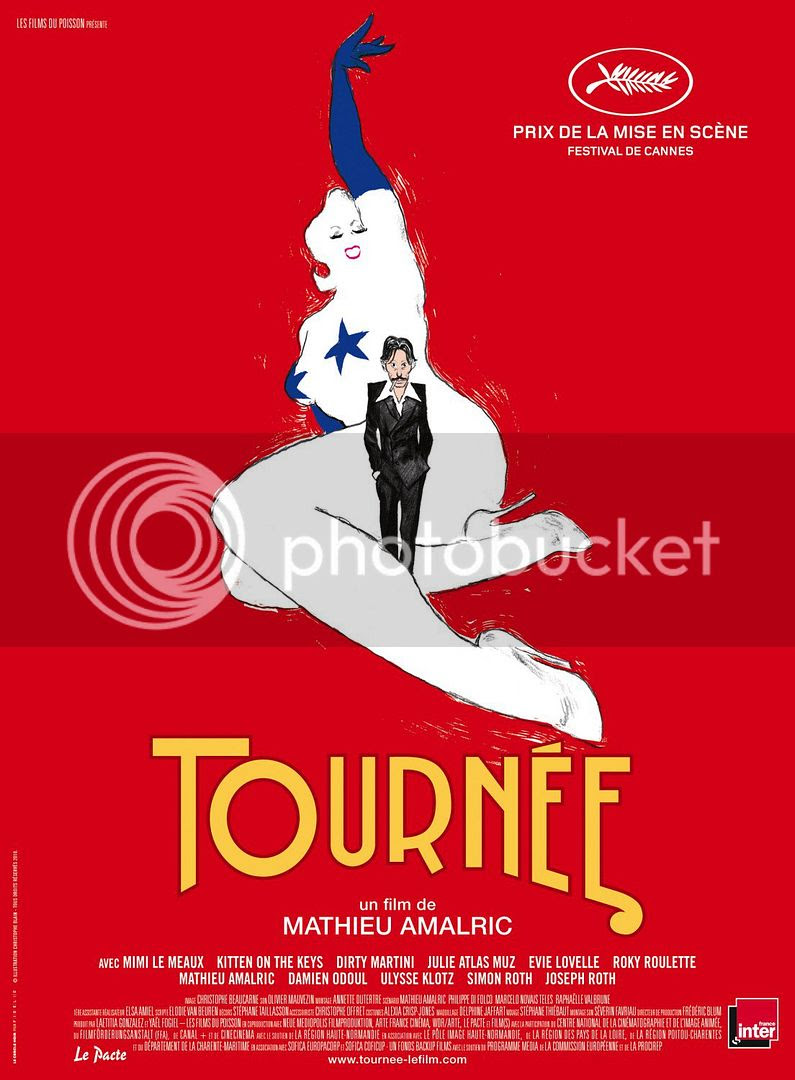 A lot of things are going on in Tournée (On Tour), though not much happens.

We follow a burlesque troupe of Americans, led by a wiley, scrabbly French manager named Joachim (the wonderful Mathieu Amalric), as they "skirt around the edges" of France (meaning, coastal towns). Things end much as they begin, with existential despair sometimes leavened by a little lovemaking and a little champagne. Joachim is a scraggly has-been TV producer, now running a self-described "girly show". But, much like a slew of Giancarlo Giannini characters (especially this one), it's unclear who's lording it over who in this sexist/feminist mish-mash. The burlesque performers - Mimi Le Meaux, Kitten on the Keys, Dirty Martini, and others (all real-life burlesque performers) - assert that the show is led by them, for them; it's a liberating experience of women taking ownership over their own bodies. It's an emancipation, even as Joachim herds and frets and stresses over logistics and booking venues.

When Joachim is not fretting over the tour, he - ahem - tours through his old French life (fresh, as he is, from an indeterminately long sojourn in the US). We meet old lovers (male and female), old colleagues, and his two kids. And everyone, okay, totally hates his guts - though we never find out why. These ancient grudges lead to some of the comedy's few actually funny scenes, such as when Joachim's son runs away in the middle of the night and then pretends not to know him in front of the police.

The film's about the show, but it's also about the tour of life, and we mostly get a classically French look at existential despair. Joachim and the girls are living a picaresque life on the edges of society - sometimes liberating, sometimes alienating. (This is best exemplified in Mimi le Mieaux, who has moments of coming apart at the seams.) 'Cuz, gosh, don't it all just make you feel so mortal! Boobs sag, eyelashes are fake, and there's a general sense of glitzy decay, of desperate grasping and of fizzling hopes. Joachim himself is a bit of a crumply sad-sack (though we felt Amalric was too young for the part), mostly trafficking in self-pity.

That said, as is usual in these "oh, the abyss!"-type stories, there's a redeeming humanism throughout. You love these characters, even if they sometimes worry about being unlovable. The girls tease Joachim, he yells at them, but there's a real affection as well. It might be senseless grasping across the abyss, but - hey - it's something!


Anyway, Mathieu Amalric directed this as well, but it was really his performance that made us want to watch, and that is the best part of the show. Miranda Colclasure (as Mimi) was touching, and there were some minor roles - the lady in the gas station! or the lady at the grocery store - that were memorable and well-done.

Posted by a ppcc representative at 11:28