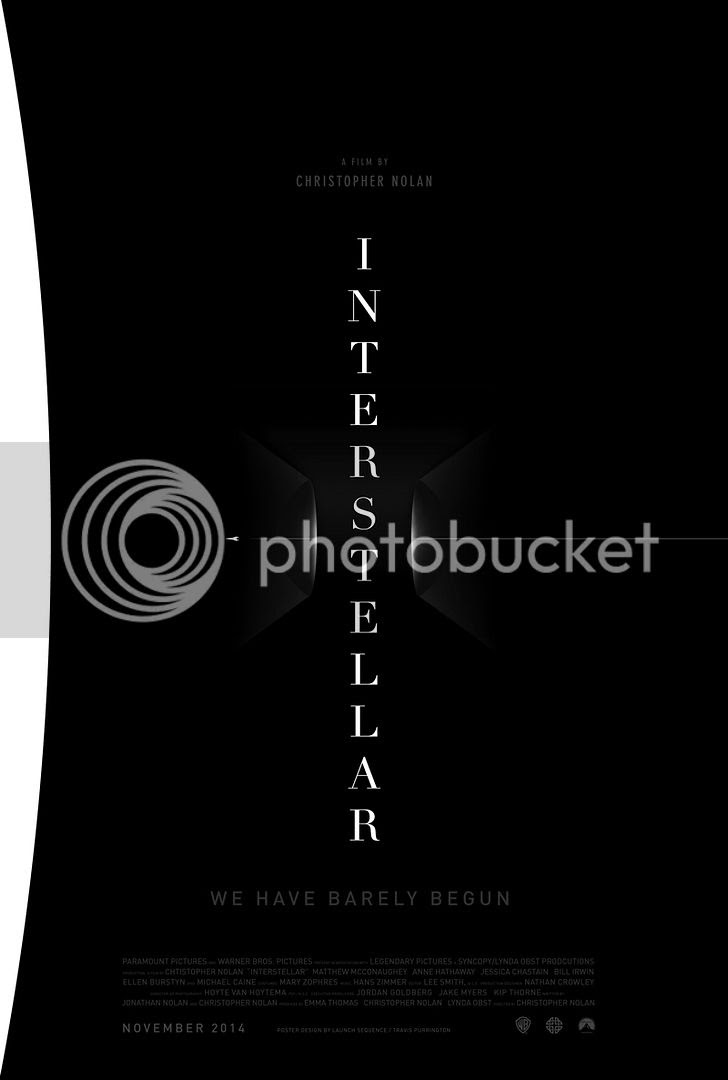 Interstellar is much as one would expect: the director, Chris Nolan (The Dark Knight, Inception, previously PPCCed The Prestige), directs movies like a late Romantic/Gothic period conductor, full of sound and fury, (often, alas!) signifying nothing. Like, look at these pictures of Glenn Branca, the experimental/art rock guy, conducting his electric guitar orchestra: this and this and this. That's how we at the PPCC imagine Christopher Nolan directing his movies. DARKER. DARKER! FURY AND THUNDER. SOUND THE KLAXONS! And so forth.

But, as with Inception, it was a bit hollow. Like Inception, Interstellar looks and smells and feels like a Big Concept Movie, and a very handsome one at that, but it doesn't really have a convincing big concept at its core. The movie's built to blow your mind, and - aesthetically - it certainly does, attaining rapturous levels of sublimity (the ocean planet OCEAN PLANETTT). But it doesn't really, really blow your mind. Not the way a good sci fi movie should: you know, the way 2001 blows one's mind with the whole alien/evolution stuff, or the way moments of Battlestar Galactica blow your mind by gesturing towards a gigantic (Mormon?) Divinity that hates robots and loves violent conflict. Or the way Dune blows your mind because it's, well, Dune and WTF is happening to these people!?

Interstellar doesn't really blow any minds. But that's OK. Moments come close. Sometimes very close, such as when freaky real-world physics things (like wormholes warping space-time, and time dilation, and relentless, awe-inspiring Nature - yo, this shit is real) are explored a bit. It's nothing you couldn't find in a Michio Kaku book or a thoughtful episode of Star Trek, but here, on Nolan's BIG CANVAS, these concepts are given the grandeur they rightfully deserve. Seriously, because - wormholes? Respect. Shit that is not to be trifled with. Worship it!

We should probably get to the plot: essentially, the movie boils down to a very classic (almost retro) Golden Age-style sci fi story. Earth is crappy eco-disaster (thanks, Monsanto). Heroic (white male) Hero (here, Matthew McConnaughey) is tasked with sitting on rocket in order to Save Everyone. Rocket blasts off! Choral music!!! Space is amazing. Also dangerous. Einstein stuff. Tragedy of time dilation.

It's actually been a while since sci fi has had such stories (it feels like we've been mostly preoccupied with monsters and cyberspace lately), and so it's oddly refreshing, even nostalgic. J.J. Abrams gestured to a similar nostalgia of Glorious Golden Age Space via the 2009 Star Trek. You know: shots of the chiseled blue-eyed hero shading his eyes in the flare of rockets. It makes you want to give money to NASA, and re-watch Apollo 13, and re-read Red Mars.

Which brings us to two things: (1) the strange, exciting way that Interstellar gets all mystical, even philosophical, and (2) the way it's a big sci fi palimpsest.

On the first point: one of the big spoilers of the film (which we will unfortunately spoil right now) is Hans Zimmer's music. Using repetitive, grandiose motifs, bashed out on a gigantic pipe organ, it feels Biblical and powerful and kind of like a Terrence Mallick film. People apparently complained about the movie's sound, since the blasting pipe organ often drowns out the dialogue. To this we say: philistines! This is like those people that got into a fight during a Steve Reich concert in 1973 (okay, that story is pretty awesome). Don't you get it?! Apparently not. We, instead, loved this. Especially the way the music was so over-the-top, and we couldn't hear the dialogue. Admittedly, we also love Philip Glass and repetitive classical music (especially in films). But we thought Zimmer's music was one of the best parts of the film, a stroke of genius.

On the second point: so, a palimpsest is a story written on top of another story. A document where the faint traces of the previous writing are evident. Interstellar has inevitably been compared to 2001, which is an obvious connection, but we actually found the vibes - especially the moments when characters realized their cosmic insignificance - to be very similar to a different 1970s sci fi film, Solyaris. Like Interstellar, Solyaris is very Romantic, in reverence of nature and our place in it, and infused with the sense of cosmic mysteriousness. The two movies feel so similar in places that we even wondered if Nolan intended this as a semi/sort of update. Nolan is too pop to go really slow, though he does try to keep the pace austere and stately. Solyaris is an unapologetic three-hour grind that is, for those who make it through, deeply rewarding: it features many of the same themes (but zero action, sorry) about unforgiving space and humanity's need to wonder/understand. The story centers around a cosmonaut visiting a lonely science station by a lonely water world, and being - in turn - visited by a ghost/apparition/unknowable copy of his dead wife. Oh my Lord, it's so good. It also features organ music (yay).

Should you see Interstellar? Duh, yes, do you even like movies?! But is the science in Interstellar sound? Mostly - Kip Thorne (of Caltech) consulted and even wrote a companion pop science book. It's about as sound as Contact, which - oh, yikes - we recommend, especially if you're excited by science and space travel. And what a surprisingly good trailer (yo, the 1990s had teeerrible trailers). Anyway, yes, watch Interstellar. Worship wormholes.

Posted by a ppcc representative at 07:06

Hey! Well written. Well, almost. Where you lacked content, yo added trivia which us mere mortals won't be aware of...however, your review is more like an analysis trying to find out similarities with similar previous attempts and it lacks an absolute perspective in terms of the cinema itself. Comparing with Kubrick's (and similar others')works, you missed to point out- "hey, for their sakes,as an ode, a tribute or to maintain trend, Nolan too used humans as characters"!