Travolti da un insolito destino nell'azzurro mare d'agosto (literally, Swept away by an unusual destiny in the blue sea of August or, more often just, Swept Away) is, in some ways, the classic "holiday from our lives" story. Just like the preceding PPCCed film, Una giornata particolare, Swept Away follows the initial clashing and eventual romance between a decidedly odd couple. A recent Hollywoodified remake was attempted by Guy Ritchie, with Madonna and Giancarlo Giannini's son, Adriano, in the leading roles - by most accounts, it was a terrible film that managed to suck all of the substance out of the original. 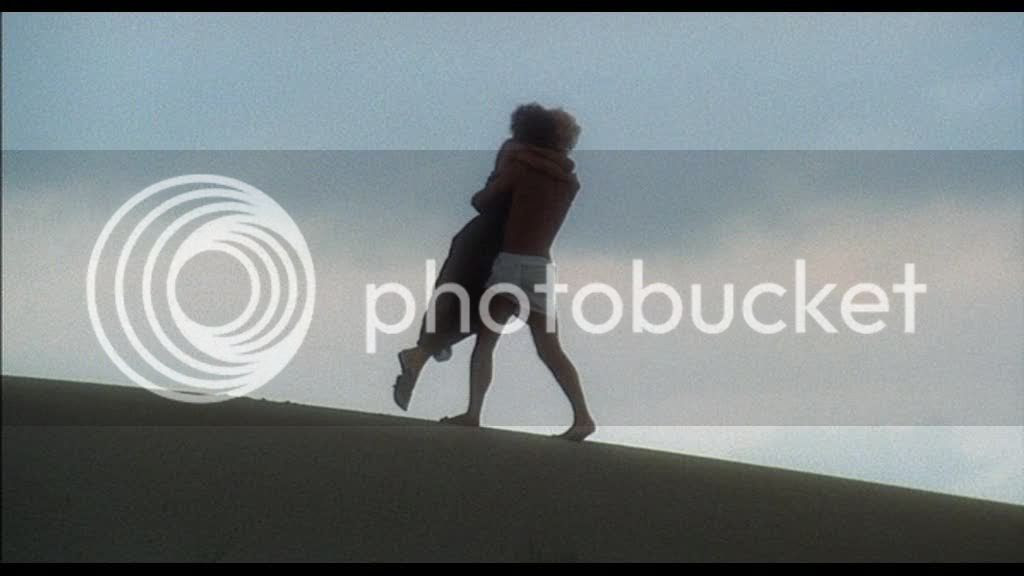 The film's palette is full of bright blues, earthy tones and white. Makes you want to fly to the Mediterranean RIGHT NOW!

Because the original Swept Away isn't just about two beautiful "opposites" attracting on a deserted island paradise. It's something complicated, provocative, erotically charged, funny, intelligent and insane. It manages to mix up 1970s Italian sociopolitics, regional racism, gender relations and human psychology into a tale that is at times outrageous, at times tender, and always very funny. The eventual love affair between the southern Communist Gennarino (Giancarlo Giannini) and the snobbish northern Raffaella (Mariangela Melato) isn't easy to relate to or understand, but it does make you laugh and even cry (a little!).

Somewhere in the glittering blue Mediterranean, there is a yacht full of rich, fashionable couples from Milan (Italy's industrial and business center). One of the Milanese women is Raffaella (Mariangela Melato), an entitled, snobbish princess-type who gets into energetic arguments with the other Milanese over those "awful Communists". There is a small group of poor, southern Italian workers on the yacht who tend to the northerners' whims - one of these meridionali is Gennarino (Giancarlo Giannini). Gennarino is a card-carrying member of the Communist Party and he grows increasingly infuriated to listen to Raffaella's talk. "It's like someone paid her to piss me off!" he hisses in private to one of his colleagues. And even worse: Raffaella steps all over him, complaining that his coffee is just reheated, his pasta is overcooked and his shirts are smelly and need to be changed when he serves her. 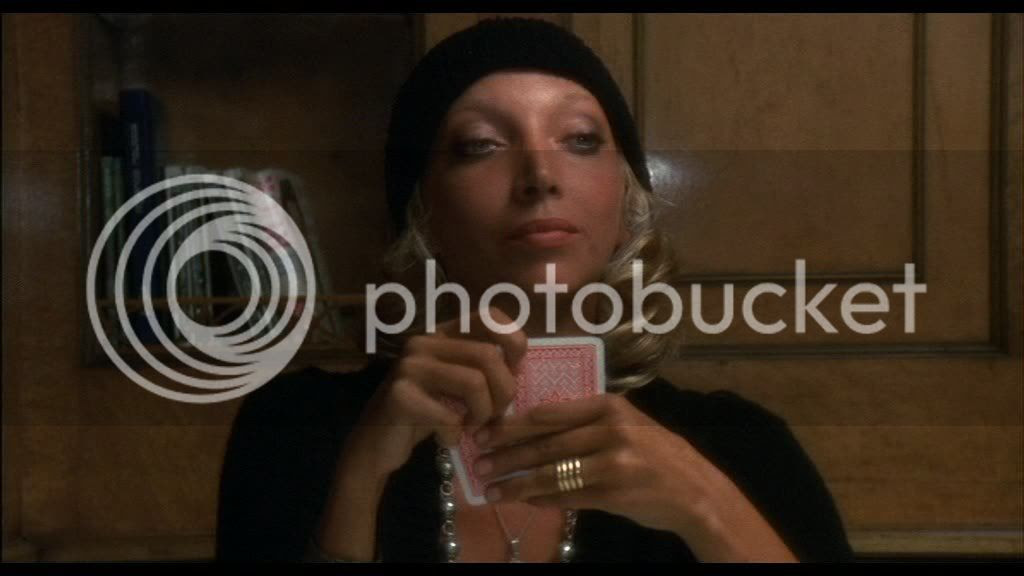 One morning, when Raffaella demands that Gennarino take her out in the motorboat for a quick swim, the motor dies and they find themselves adrift in the wide, lonely sea. After several days, they land on a tiny, deserted island and Gennarino, finally fed up with Raffaella's bitchiness, explodes with rage, tells her off and stalks away. Since Gennarino is much better at coping in the harsh conditions, Raffaella eventually finds herself begging him to let her have some of his food. And Gennarino, taking advantage of his suddenly powerful position, abuses, blackmails and enslaves Raffaella. And thus begins their tumultuous, bizarre, slightly sadomasochistic affair. 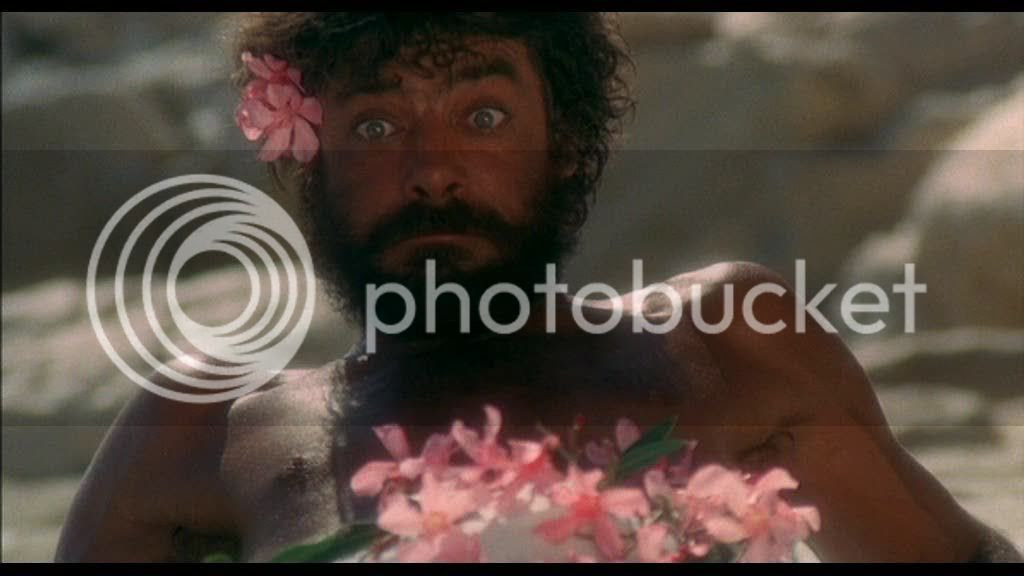 One of the funniest moments: when Gennarino (Giancarlo Giannini) wakes up to find himself, ahem, adorned in flowers.

Much of the "romance" is really about power struggles. Just like the uncomfortable lovemaking scenes in Ang Lee's recent Lust, Caution, Gennarino and Raffaella's bedroom (okay, beach) is where all the power struggles are played out, often violently. It's not just about kinkiness or Stockholm syndrome, it's about the power struggles between the rich North and poverty-stricken South, the mainstream, "industrialist" Democrazia Cristiana Party and the opposition Communist Party, the master and servant, man and woman. 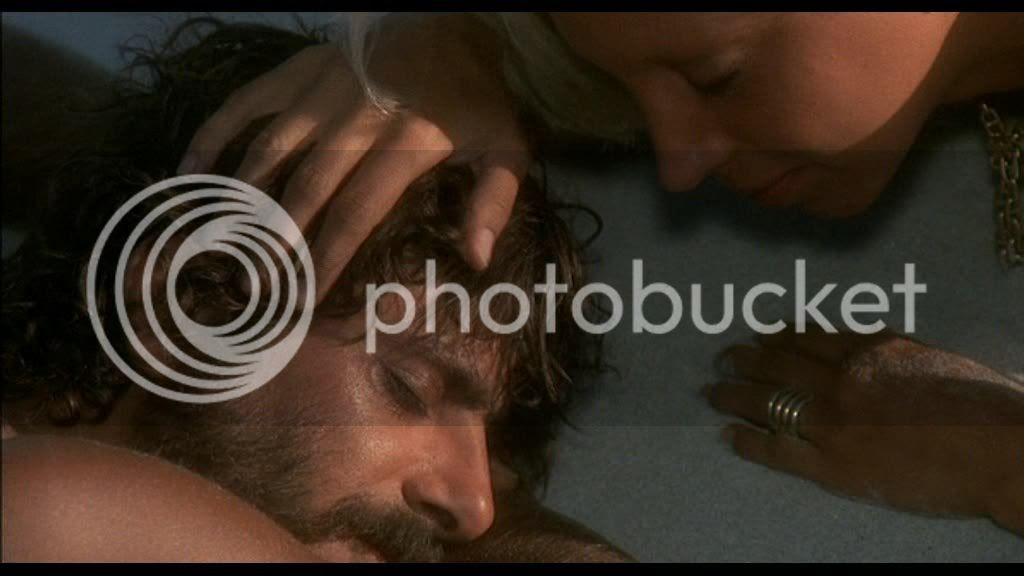 That's not to say that the romance isn't also oddly touching. We knew about the film's themes before watching it, and we never imagined we'd find ourselves almost rooting for Gennarino and Raffaella. For example, there is a scene when a boat comes by the island and only Raffaella sees it. Rather than calling to it, she - properly swept away by her new love for Gennarino - hides until it leaves. And we at the PPCC found this moment utterly romantic! "I didn't want this to end!" she sobs to him later. Indeed, while the spark was a somewhat perverted and sadomasochistic attraction, loaded with all those sociopolitical issues, their love eventually becomes remarkably sweet and simple. It's never saccharine though - the end makes sure of that, when the sociopolitics and reality come marching back.

This is a much-loved Italian classic, and the performances by Giancarlo Giannini and Mariangela Melato are fondly remembered by everyone we talk to - heck, the DVD cover calls this their best work EVER. Both Giannini and Melato have appealing, if unconventional, looks - a bit laconic hangdog for him and bumblebee doll for her - and yet in this film they are glamorous and glittering in a primal, sun-drenched way. We've always been a bit mystified by the glassy-eyed praise Giancarlo Giannini's beauty gets on YouTube comment pages. Adorable and lovably cute, yes, but sex god, uh...? And yet, after this film, we can see why people might go a bit crazy for him.

DVD Bonus!: The Italian DVD of this film contains interviews with the director, Lina Wertmuller, and lead actress, Mariangela Melato. The Melato interview is a hoot - she proclaims that the remake was trash and that she was definitely "più bona" (hotter) than Madonna, and she tells how apparently the weather was frigid and, to stay warm, she and Giannini drank grappa in their morning cappuccinos and spent most of the shooting "rincoglioniti" (befuddled).

(P.S. The review entitled "Screwball Comedy, Italian Style" by Arriflex1 on the IMDb comments page for this film is more concise than ours and spot-on!)

Posted by a ppcc representative at 20:04

What a review!
I now abandon my hard found financial responsibility, send budget in tizzy and order the movie.

Ay lurves this movie! This is the story those Harlequin novels from the early 80s tried to tell but always ended up as hideous I-love-my-rapist tales.

Oh, and yes, the remake was trash (I always wondered if it was Guy Ritchie working out his fantasies) and Madonna can't hold a candle to the original. It also makes sense to me that they were all drunk when they made this movie.

Must get this one. I love love stories. Pity most of the latest romantic comedies are so banal. Just watched 2 most dull ones, 'Cake' and 'The Heartbreak Kid'.

I just watched "A Fistful of Dynamite" and remembered that non-Hindi films can be awfully fun too, and their heros just as sublime.

The original 1974 Swept Away is unforgettable. Some of it is disturbing as when Gennarino kills a rabbit and physically slaps the woman. Gennarino's character is both cruel and sympathetic as is the woman he slaps around. I dont see this as a clearcut case of good vs. evil although the movie does tend to favor Gennarino as the victim and the woman as the villain. Different people interpret the same thing differently and perceive the same thing differently. The Meditterranean setting of the island is wonderful. I wish I could love on such an island with fruits and vegetables and a freshwater spring. I would not hunt any animals. After Gennarino and the woman are rescued Gennarino decides he wants to return back to the island with the woman. How could they live there for the rest of their lives with no doctor no dentist no toilet paper no soap no clean underwear no toothpaste and no heating? Starvation and dehydration mosquitoes ticks snakes etc are all hazards. It sounds idyllic to live in a wild island or a wild forest like Adam and Eve but its unrealistic and dangerous. One can camp for a few days or a few weeks in the wild but not for the rest of one's life as Gennarino suggests. Anyway the woman understandably abandons him by helicopter and leaves him stranded. Gennarino is furious and heartbroken. Gennarino's wife discovers that Gennarino had an affair with the woman who left on a helicopter and demands a divorce. Gennarino slaps his wife and the film ends. Its a very sad depressing ending. Swept Away is well acted.