Una giornata particolare (A special day) is a sometimes poignant, sometimes drab look at humanity imprisoned in dreary, mind-numbing, collective insanity. Taking place over one day - the day in 1938 when Hitler visited Mussolini, heralded by an ecstatic Italian public - and in one place - a decrepit, working class apartment block in Rome - it is very disturbing in its portrayal of normalized cruelty. While the setting - World War II-era Rome - has been presented in a number of glorified ways (compare this, for example, to the sun-drenched Life is Beautiful), this film strips everything down to its most unremarkable. Fascism starts to look a lot less epic, or at least Hollywood villainous, and a lot more Orwellian: deceptively bland and terrifyingly insidious. 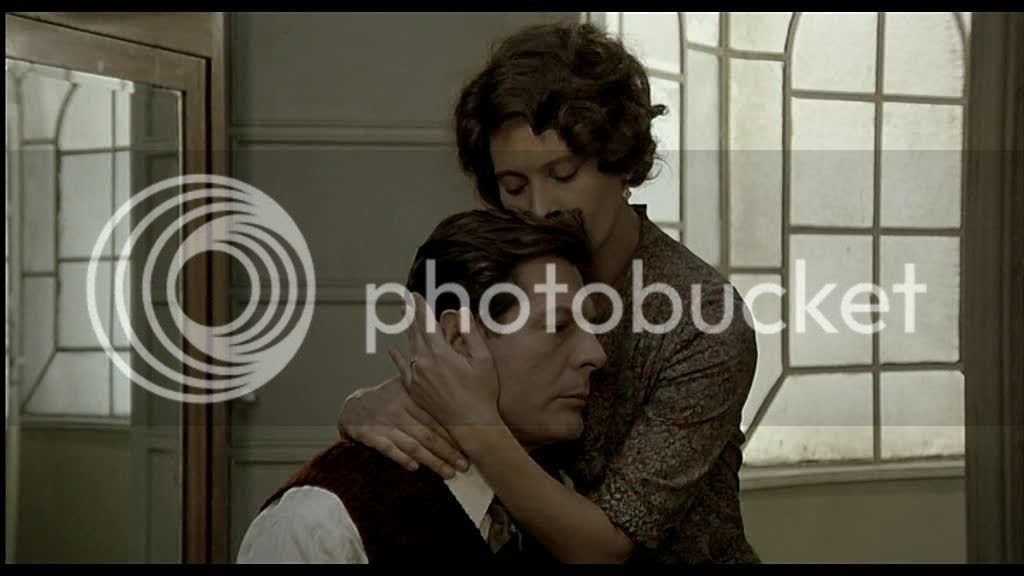 Antonietta (a highly deglamorized Sophia Loren) is a working class housewife, who, along with her husband and six children, swallows Fascism without a second thought. She doesn't bother to worry too deeply about anything further than her own kitchen, the petty complaints of her family and her apartment landlady. Instead, she tidily dresses her children in their black Fascist Youth uniforms and, for fun, works on her scrapbook dedicated to Il Duce. On the "special day" when Hitler himself has come to Rome, she packs everyone off to troop down to Piazza Venezia while she stays behind and listens to the proceedings on the radio. The only other person left in the apartment building is Gabriele (a tired-looking Marcello Mastroianni), a persecuted homosexual radio announcer who was considering suicide the very moment Antonietta knocks on his door in search of her lost myna bird. Grateful for the distraction and company, Gabriele invites himself over for coffee. Antonietta, meanwhile, misunderstands his advances as sexual - and she's not entirely averse to the idea (well hey, it is Marcello Mastroianni!).

Little by little, however, Antonietta and Gabriele move past the pleasantries and the stark differences in their lives, outlooks and beliefs are revealed. When Gabriele finds a Mussolini quote in her scrapbook saying that woman are basically born to serve, he asks her about it with polite disbelief. Antonietta doesn't bat an eyelid: "Of course I believe that. All the great men of history were men, after all." The tension - sexual, political, emotional - eventually comes to a crashing climax with Gabriele's revelation that he's gay and, from then on, the PPCC had a distinct feeling of being in an Orwellian, dark version of The Breakfast Club: that is, watching two "Others" grow increasingly companionable during a one-day vacation from their normal lives. Except this time round, it's not school and the studly, hardcore punk, it's Fascism and the the dapper and unfortunately uninterested neighbor. 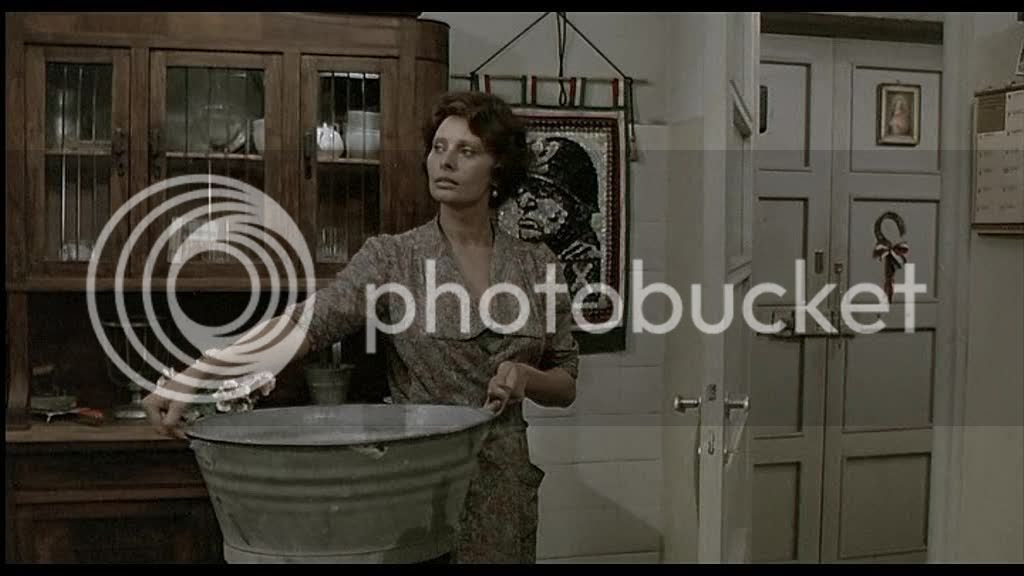 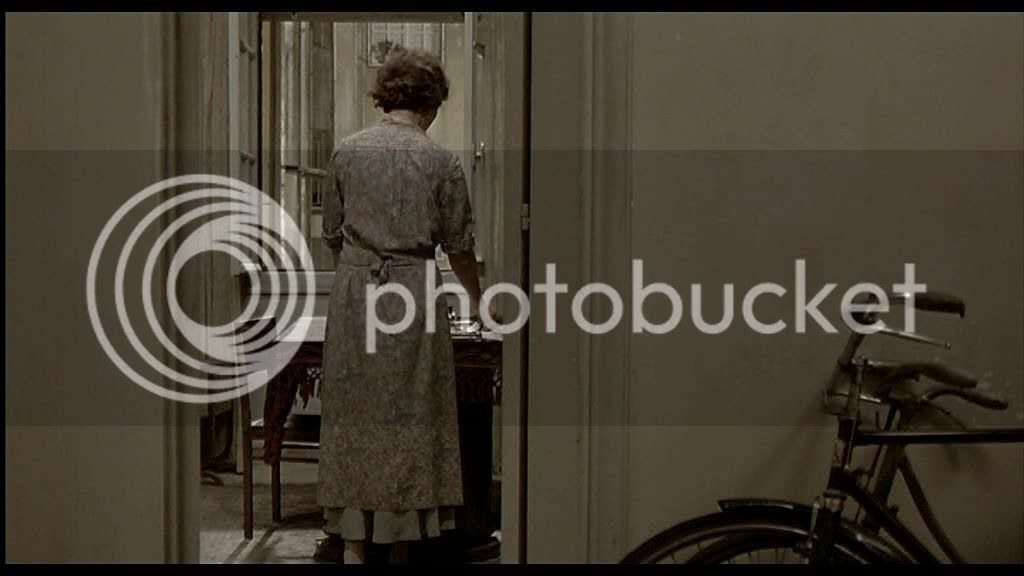 This one can be called still life at home.

The look of this film is drab and colorless - at best, it felt a bit Morandi-esque, often, though, it just looked boring. We almost forgot how gorgeous our beloved Rome is, and when Sophia and Marcello have their little breakdown on the rooftop, we were stretching our neck to catch sight of the sunny apartment buildings in the distance. Ah, Roma. That said, the monotonous aesthetic perfectly captured the imprisoning boredom of Antonietta's life. In those final moments, when we see her standing at the window and looking into the courtyard, you can't help but imagine bars on the windows. The film is devastating in showing us how, like the "stupid" myna who tries to flee in the early scenes but is eventually caught, the "ignorant" Antonietta is given a taste of freedom through her chaotic confrontation-cum-bonding with Gabriele, only to have that freedom snatched away, probably forever. For however much Gabriele can shake Antonietta's life up with his "subversive" and challenging identity, he is just as trapped as she is. (This (oddly and irritatingly a little homophobic) old New York Times interview notes that, in 1938, the Italian government exiled a number of homosexuals to Sardinia, where they couldn't "contaminate" the Fascist Party. Indeed, Gabriele relates how he was kicked out of the Party for not being a "man" and his lover sent to Sardinia.) The prison that these people live in - Fascist Italy - is both seemingly mundane (the kids wonder about whether Goebbels was the one who looked funny, and it's obvious that things like concentration camps don't even enter into their equation) but also everywhere and controlling: the Nazi swastika draped over a window, the continuous drone of tinny Fascist anthems from the radio. Even if the building is empty, there is a feeling that the walls are watching and there is no escape. 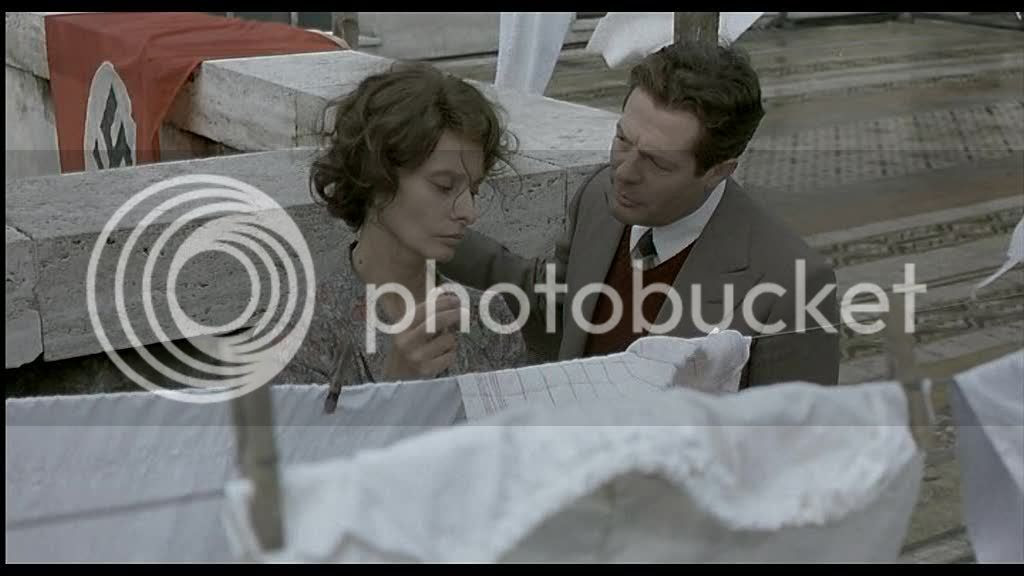 Silenzio! That flag can probably hear you!

A film like this relies almost entirely on the performances, as all of the drama is dialogue-driven. Marcello Mastroianni and Sophia Loren are probably the most well known Italian actors of their generation and they deliver very strong performances which several reviewers have noted were "against type". That is, Mastroianni and Loren have a bit of a reputation among the international intelligentsia for their gorgeous, Latin lover roles. Here the two of them are decidedly not so glittering - both looking haggard and a little unkempt. But we should also say that we at the PPCC don't really buy the "type" for them - especially not for Mastroianni, who, in every film we've seen of him, played limp lettuces rather than studly Casanovas. Just consider his role as a tabloid journalist in La Dolce Vita with his incompetent flirting with the Swedish model, incompetent boyfriending with his Good Italian Girlfriend and incompetent one-night standing left and right (always initiated by the women!). He never seemed like the predatory playah, he always just seemed a bit bumbling and confused but, thanks to his good looks, appealing. He never really seemed to work it in the same way that, for example, Shashi Kapoor worked his incredibly irresistible sex appeal.

Anyway, once again, we think the main value of this film is in educating the non-Italian audience in the quotidian life of Fascist Italy. It is indeed surreal to hear the characters take things like Hitler, Mussolini and black shirts so lightly - as if this was all very mundane instead of historically significant and terrifying. But then again, we guess that's what it would feel like from the inside of the cage! If you're in the mood for more from this sad, dismal chapter of Italian history, only with an extra factor of major freakiness and philosophical meat, check out Pasqualino Settebellezze as well.

Posted by a ppcc representative at 22:43

I always seem to be catching this film mid-way somewhere, and yes, I do change channels because it seems so dreary. But should be interesting from your review. Next time.

Sophia looks fab no matter what :)

I'm not really into Italian films but you sure got me interested in this one!

Seems like I'd really love this or hate it...I like the potential for depth and emotion and can appreciate some films that rely heavily on dialouge and performances (As in "A Raisin in The Sun") But I somehow get the feeling you weren't too enthused by it?

I also own "Life Is Beautiful" and have been meaning to watch it soon...I'll have to check out your review on that one!

Banno - Gasp! They show it on TV somewhere??! It IS dreary, it doesn't get any better.

Nida - I wasn't really that excited by it, no. In fact, I think its main attraction is Sophia and Marcello - even then, I still only feel lukewarm about it. Definitely watch Life is Beautiful - it's a real crowd-pleaser, very enjoyable. Alas, I haven't reviewed it yet!

we at the PPCC don't really buy the "type" for them - especially not for Mastroianni, who, in every film we've seen of him, played limp lettuces rather than studly Casanovas

Which proves the P-PCC is smart! I always remember that striptease in Yesterday Today and Tomorrow whenever someone talks about Marcello the Latin Lover - although I suppose he WAS that in real life (sigh! I haz crush.).

This movie broke my heart. I'd always thought of that meeting between Hitler and Mussolini in terms of The Great Dictator (food fight!) just because that was my first cinematic depiction of the event, and then to watch this from people who actually come out of that milieu... funny thing is as I was watching it, I didn't know whether I really liked it. In fact, at the end of the movie I was pretty darn sure I disliked it. And then it was over, and I realized I loved it rather.

Amrita - Oh my goodness, YES! I've only seen the scene on YouTube and it had me cringing in embarrassment. And yet... I too haz crush on Marcello.

And YES to your ambivalent feelings towards this film! I'm pretty sure I disliked it, though I'm also pretty sure it's a very good film.

it's one of the later gems of that golden Italian era that started with early fifties and ended in eighties with better Bertolucci and Marco Bellocchio films. Not only for the melancholic sad portrayal of a particular time in Italian history masterly enacted by Loren and Mastrianni, but handled with such subtlety by Ettore Scola as well, Scola at his best!