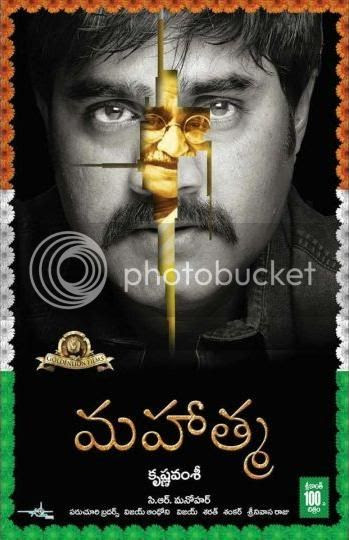 The sweet-natured, child-like Mahatma is one of our favorite types of films: the social pop masala. Think of it as a less intelligent, less over-the-top Nayak, but with the same vibe of do-gooder concern, moral redemption, and glassy-eyed Indian patriotism which still acknowledges the country's problems (particularly, political corruption). Using the memory of Gandhi as a focal point, we follow the exploits of the rascally goonda-turned-good-guy Das (a boyish Srikanth) who decides to challenge his local politician's might by forming his own party: the Mahatma Party. Initially a bit of a strategic move to get votes (hey, everyone likes Gandhi!), Das soon finds himself converting to the philosophy of satyagraha and ahimsa, reforming himself into a morally upright upholder of social justice. Overlaid over this are some criticisms of local Andhra Pradesh politics, as well as the required romance (quite sweet!). Opinions in our group were pretty polarized following the film, and we at the PPCC were pretty much on the fence: it was OK. Also, well, it was in Telugu - which we don't speak (yet!).

The story centers around a small neighborhood located somewhere in busy Hyderabad. Here we meet Das (Srikanth), and his band of loafers - his henna and kohl-bedecked buddy, Something (Some Guy), some other dude who is a suspended cop, and a variety of other pot-bellied guys lazing around the base of the derelict neighrborhood Gandhi statue, drunk and rowdy. Das doesn't seem to have any great ambition in life, though he does occasionally dishoom dishoom some guys and he flirts with the idea of pursuing a career as a Telugu film star. On the way, he runs into the cute Girl Next Door (Bhavana), which, after various mix-ups and taunts and one excellent "Falling in love in Hyderabad!" song, gets the romance going.

Meanwhile, the local politicians are engaging in their usual corruption nonsense - with the local politician, Fire-breathing Woman (apparently a parody of a real-life Andhra politician), aggressively trying to open up yet another huge shopping mall ("Fab City"!), and the other scary politician, Big Dude (Some Big Guy), giving her trouble. When Big Guy hires Das as his premier thug, Das engages in all manner of ass-kicking in a moral vacuum. But, because Das's heart is golden, he eventually can't take it anymore and dumps Big Guy in order to start his own challenger party: the Mahatma Party. But can Das give up his drinking, loafing ways? Cue the sermons on turning the other cheek, practicing self-discipline and being a Good Person. Cue the diet Nayak stuff. Cue a brief reenactment of Gandhi's life. 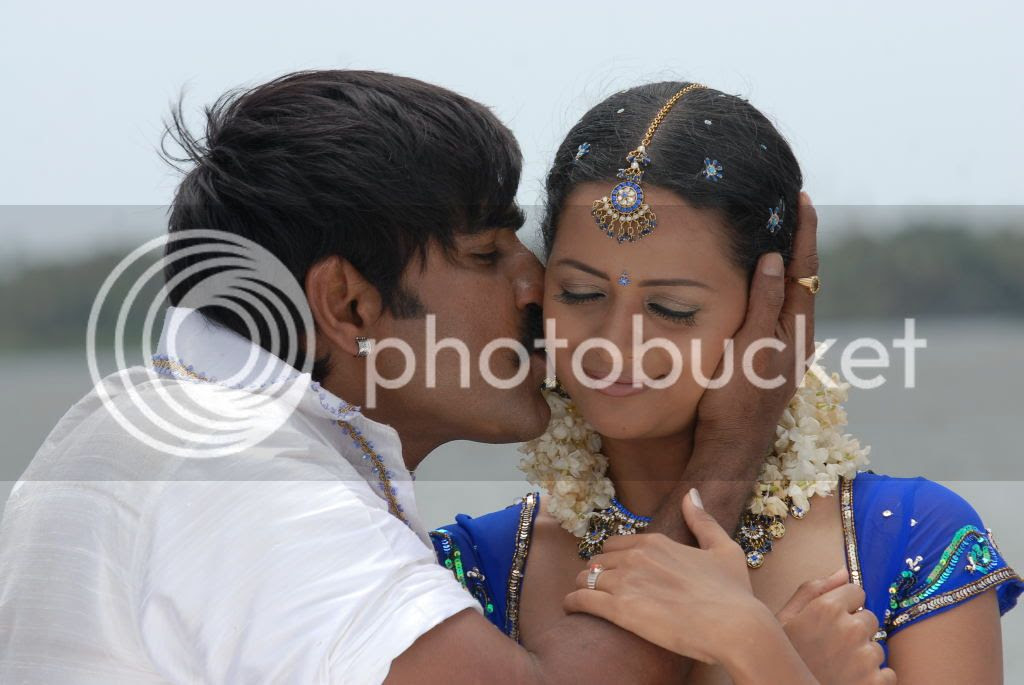 Srikanth and Bhavana, in a lovely number in Kerala. Sooo cute.

Now, this is our third Telugu film, and so everything is still so shiny and new for us - and we are very forgiving. Plus, watching something which takes place in Hyderabad still fills us with demented glee - OMG! The Banjara Hills/Jubilee Hills flyover! OMG! Charminar! OMG! The Big Buddha in the Hussain Sagar lake! Oh, Hyderabad, Hyderabad, Hyderabad! Indeed, the "falling in love in Hyderabad!" - with its sweetly (and unexpectedly) realist portrayal of text messages, motorcycles, temple visits and Hussain Sagar really just hit the spot, man. Also, we probably missed all the inane/clever/whatever dialogue, thanks to our complete lack of Telugu skills ("koncam!" can only get you so far).

Srikanth was likable enough as the boyish, rogueish Das. He had an Anil Kapoor-ish quality - but maybe that was the whole moustachioed socially-minded rascal thing. Bhavana was adorable as the shining light of goodness-type girlfriend, and our heart broke when Das disappointed her by not resisting the liquor. The songs were pretty fabulous - bright! shiny! energetic! - especially the first item number, Jajjanakka, which was just all over the place and fabulous. We were THISCLOSE to dancing out of our seats, man! We said it before and we'll say it again: Telugu choreography owns Hindi dancing.
Posted by a ppcc representative at 07:14

Hee!! I loved this review!! Definitely sounds like a film I could get behind... You should check out Chatrapathi for another social masala film. I'm dying to know what your take on it is...

Love the review too!! I have yet to check this film out. But i listened to the songs on youtube. Jajjinaka & Neelapuri neelaveni sound awesome :)

Filmigirl: Isn't Chatrapathi directed by Rajamouli? The same guy who made Magadheera?