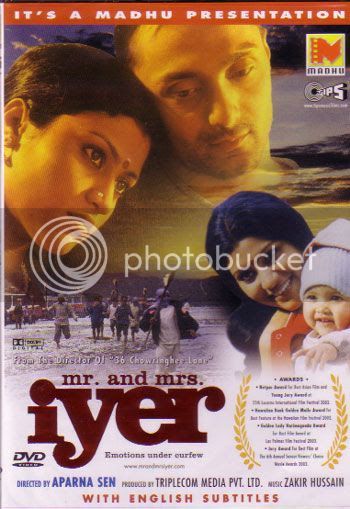 Mr. and Mrs. Iyer is a real tearjerker. Confronting the hairy problems of India's sectarian violence, it appends an unexpectedly romantic edge (think Cairo Time!), as the titular "Mr." and "Mrs. Iyer" - a Bengali Muslim and a Tamil Brahmin - go from uneasy trust to a rare and special bond.

The story begins when Meenakshi Iyer (Konkona Sen), the real Mrs. Iyer, readies herself and her infant son for a long journey to meet her husband in Calcutta. Amid the fluttering of her assorted family members, Meenakshi is introduced by a mutual friend to Raja (Rahul Bose), who is also travelling and has agreed to help out. 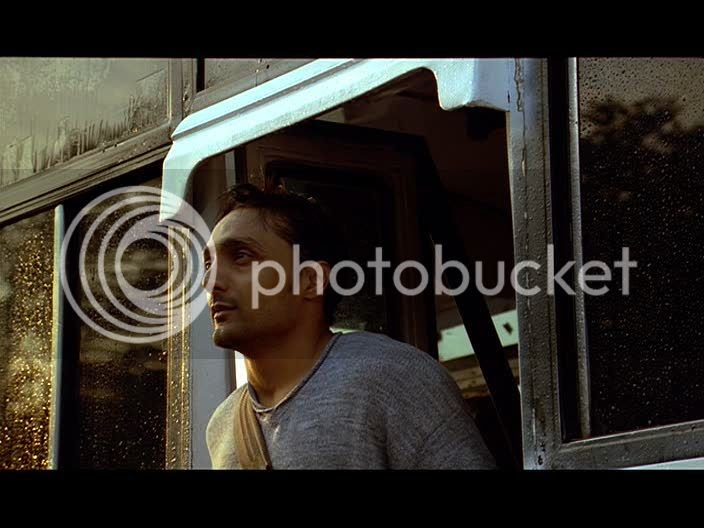 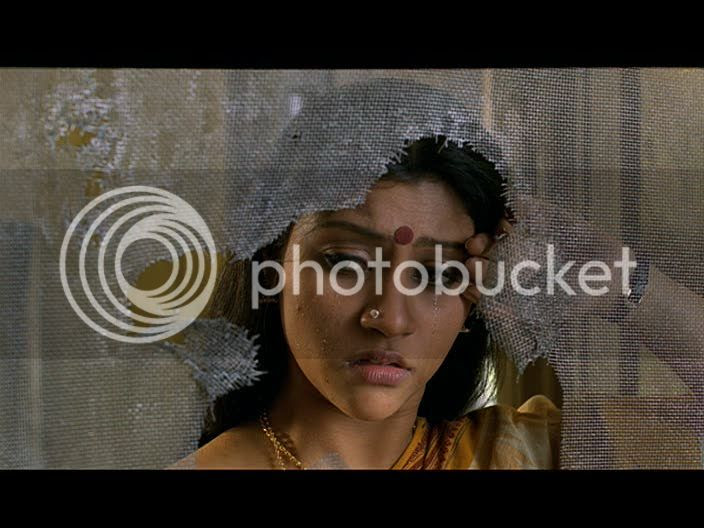 The initial bus journey begins innocently enough, with a charming, Altman-esque sequence where the bus passengers - and, importantly, their diversity - are introduced. Director Aparna Sen (who we last saw in Immaan Dharam, another tearjerker!) uses light, breezy gestures to touch on issues such as modernism ("When I met you," an elderly Muslim man huffs to his wife after having a youngster's bare midriff in his face, "the only thing I could see of you was your hands!"), communalism ("Bloody terrorists," a young Hindu grumbles), and the ever-present tensions lurking beneath the happy, chaotic surface. In the prologue, Sen splashes the screen with a mess of newspaper headlines, all screaming the same thing: VIOLENCE! DEATH! RACISM! FEAR! The bus passengers wrap their food in newspapers with grotesque headlines. But it's hard to imagine that such violence could ever touch the easy-going domesticated vibe in the bus.

But that, of course, is Sen's point: juxtaposing this innocent diversity with the horrors to come. After an unexpected detour, the group encounters a long traffic jam on the solitary country road. Wild rumors run up and down the line of waiting vehicles: there was an accident. Someone was murdered. And, finally, the worst: communal riots have started. Hours pass, and a harried policeman (Bharat Kaul) eventually arrives, begging everyone to stay in the bus. Raja, who has helped Meenakshi throughout the journey with taking care of the infant, and with whom Meenakshi has generally struck up a friendship, announces that he is Muslim and must therefore flee. At first, Meenakshi is horrified that she shared a water bottle with a Muslim - but, when a group of torch-bearing Hindus arrives - she quickly claims him as her "Mr. Iyer". 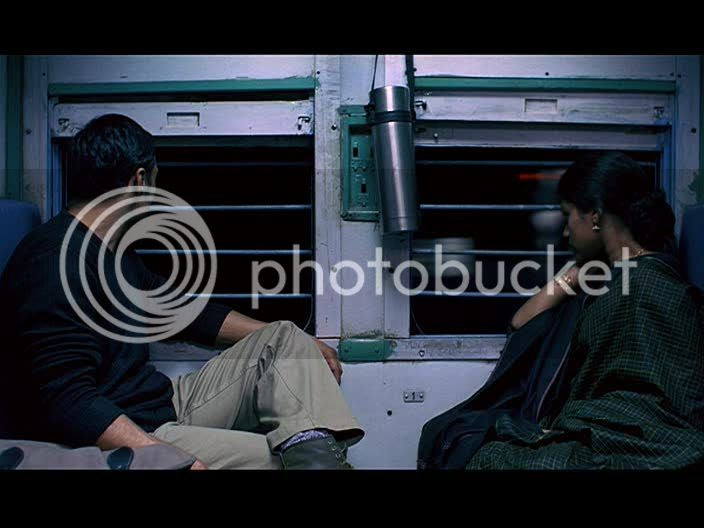 A brief plug for the excellent Indian railway system.

A great thing about the film is that it never wallows in the violence. Instead, we remain with Mr. and Mrs. Iyer as they skirt along its edges. Mostly, they and the other bus passengers must wait and wait and wait while the roads clear. Scenes of any real bloodshed are rare, and the passengers' general naivete regarding their situation is underscored by their occasional quasi-ghoulish delight in relating the gory details of the rioting. "You know that old couple?" one fellow passenger tells Mr. and Mrs. Iyer at one point. He draws a line across his neck. It's a harrowing reminder that, until you are physically confronted with violence, that violence can be difficult to imagine. 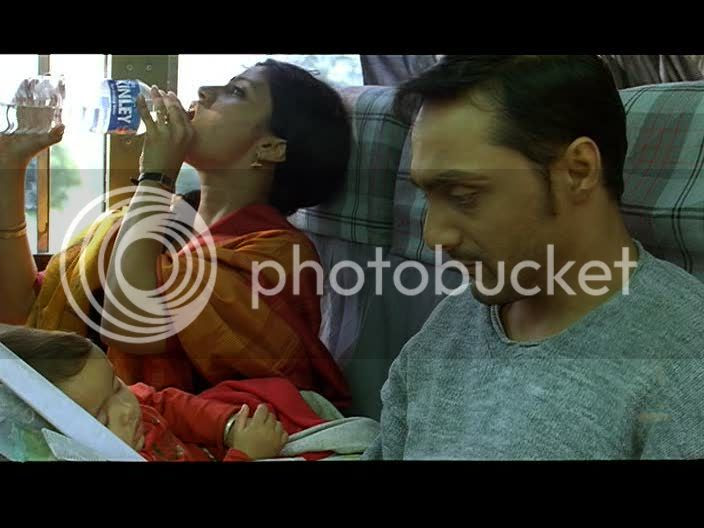 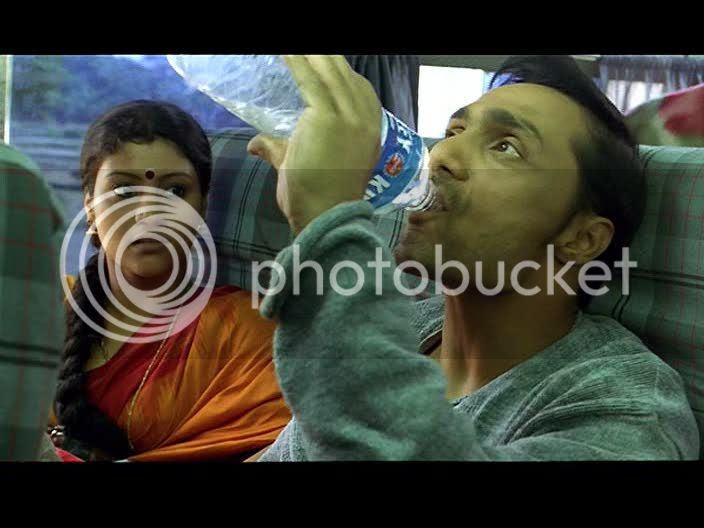 ...and is horrified to watch Mr. Iyer drink it in the "modern" fashion! Juthaaaaa!

Of course, the big Moral of the Story is that communalism is bad, and the cycle of vengeance is pointless. This is, if anything, a tired, well-worn notion. What's slightly more interesting is how modernism, as represented by the jet-set Raja and his enormous Nikon camera lens, is not necessarily portrayed as always right. "Oh, don't give me that Tam-Brahm bullshit!" he spits uncharitably in one scene. Similarly, traditionalism and orthodoxy - as represented by Meenakshi - has both its own benefits (the preservation of culture, via her son's name) and shortcomings (her bigoted views of other castes). It's only when Mr. Modernism and Mrs. Conservative overcome their differences and learn to trust one another that the evils of communalism can be overcome. Given India still struggles with endemic prejudices, it seems that Mr. and Mrs. Iyer have much to teach us!

...Or that India needs Sesame Street diversity education, like that one excellent article said!

Posted by a ppcc representative at 21:46

I just watched this movie on the weekend and was impressed with it, despite it's slow pace. It left me feeling both moved and angry at the same time. I'd never seen Rahul Bose in anything before, but have always loved Konkona and thought they were both terrific in it.

This was my first Konkona film but second for Rahul (though I remember not being very impressed with Jhankaar Beats) and immediately decided to love them both henceforth. My parents just watched this - as part of a "the history of India in film" series at the university in their town - and liked it very much and called me, full of questions about the film AND the topics it represented. I probably need to watch it again - I have a feeling I'd get more out of it with four more years of learning about India under my belt.

A truly good movie and very relevant to India as you have rightly pointed out. Konkona did a great job and hence her winning a national award for best actress was not surprising. Aparna's direction deserves kudos esp the cultural nuances she has portrayed - eg drinking water from the bottle!

Shell - What a coincidence! I had the same feelings. Rahul and Konkona are great, aren't they? Like kittens.

Beth - You should definitely give it another go; it's really sharp about the contextual details.

Filmbuff - Thanks for the recs! Ahh, I love the water bottle thing.