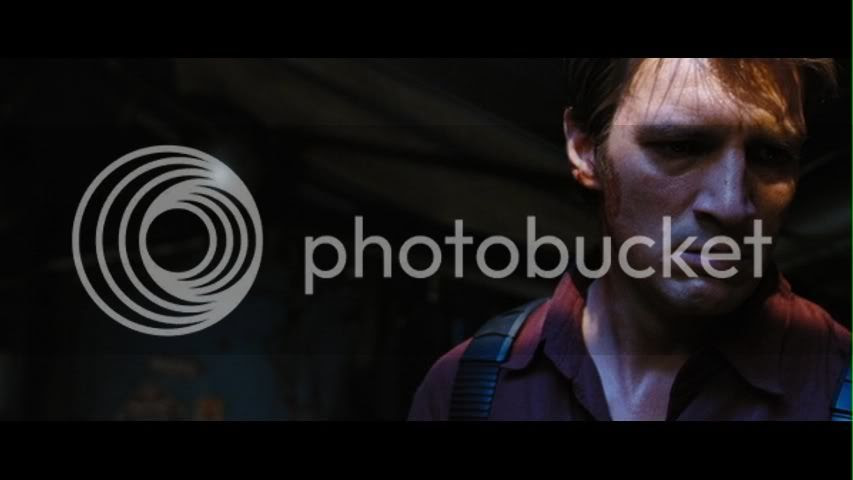 Honestly, Serenity should really be called The Continuing Adventures of Han Solo. The New York Times review notes that "this unassuming science-fiction adventure is superior in almost every respect to George Lucas's aggressively more ambitious Star Wars: Episode III - Revenge of the Sith" - but that's being a bit cruel. Serenity doesn't have the weight of a huge cultural legacy, and so it has a lot more leeway to let its characters be edgy, rough-cut and quick-witted. (That said, Serenity does have the scarily intense fanbase to contend with. More on that later.)

The writer-director, Joss Whedon, goes to great pains to show us just how morally ambiguous the Han Solo character, Mal (Nathan Fillion), is: or rather, just how many ethical dilemmas a man can get into in that great, big, wide galaxy. Like Han Solo, Mal (short for malice? maladjusted? malty?) is a salty spacefarer who's seen too much o' the 'Verse. In wonderfully fun Civil War parallels, Mal is a veteran from the losing (Confederate!) side of a galactic war, and now he runs around the galaxy trying to make ends meet. He sometimes shoots people for their own good, but justifiably is tormented by it afterwards in gloomy private. He also has wonderful bone structure which makes for excellent shadowing over the eyes, very hot in a dystopian way. Anyway. Aboard his ship is the usual motley assortment of ensemble fun: the beefy Jayne (Adam Baldwin), the loyal first mate Zoe (Gina Torres), her hubby and resident clown Wash (Alan Tudyk), the gender stereotype-breaking mechanic Kaylee (Jewel Staite), the ethereal doctor Simon (Sean Maher) and his even more ethereal little sister, River (Summer Glau). All these characters basically stand-in for Chewbacca, with Jayne perhaps being most Chewie-like in terms of brawn, and River being the most important. 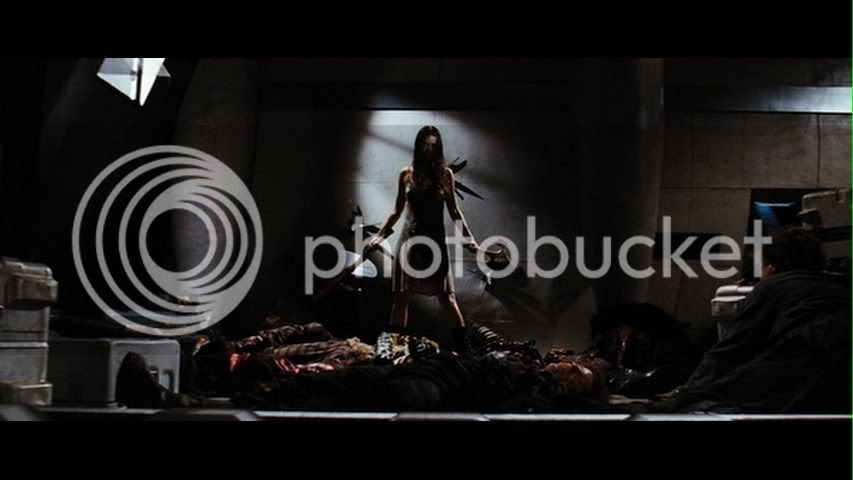 River's importance stems from the fact that she's been brainwashed by the Alliance (AKA the Empire, or the Union) into a killing machine. Apart from being extremely flexible and able to whoop ass, she also has uncontrollable psycho episodes which make life hard for everyone onboard. Yet Simon is desperate to help her, and Mal is, pardon the pun, malleable enough to let them stay aboard, even at great risk to everyone else. Because soon enough the Alliance sends one of its creepy, quasi-philosophical ass-kicker assassins, AKA the Operative (an excellent Chiwetel Ejiofor), to get River back into Alliance clutches. Much spaced out action-adventuring ensues. 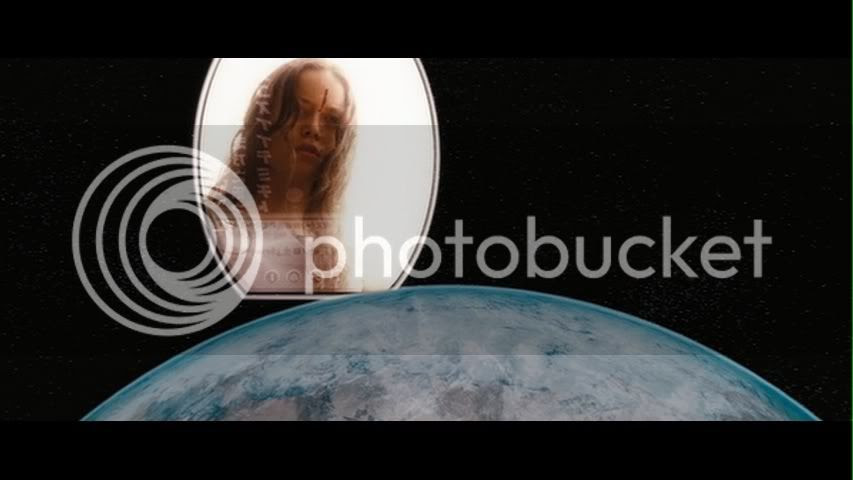 Hilarity and fun and some weird shit, too!

The film, which is based on the short-lived cult series Firefly, is basically a space western. There are a number of clever set-ups: characters regularly spit Mandarin curses as a nod to the imagined Sino-American colonization of the new star systems; poorer characters rely on guns and horses since lasers and hover cars are just so damned expensive. The greatest threat to the star system - the eerie, inexplicable Reavers - are not aliens but humans gone really terribly wrong. In fact, no aliens feature at all. Instead, this is a pulpy sci fi film that relies on its wits and its humanity - much to our delight!

Because of this western vibe, the dialogue takes some getting used to. But Whedon - creator of Buffy the Vampire Slayer and other culty TV shows - has a quick, television-style way with words, turning the script into a series of excellent, double-take-inducing dialogues. For example:

Kaylee: Goin' on a year now I ain't had nothin' twixt my nethers weren't run on batteries!
Mal: Oh, God! I can't know that!
Jayne: I could stand to hear a little more.

Mwa ha ha ha. Or such disorienting Mandarin interjections as:

Mal: Come a day there won't be room for naughty men like us to slip about at all. This job goes south, there well may not be another. So here is us, on the raggedy edge. Don't push me, and I won't push you. Dong-luh mah?

It's fresh, it's new, it's addictive. We admit that we saw Serenity knowing nothing about any of it, and we came away in love, with that same heady escapism of Empire Strikes Back and Han Solo's tight pants. What was wonderful about Serenity (and also parallels ESB, and, no, it's not just Mal's equally tight pants) is its underlying dystopian aesthetic: we see uber-urban settings at night, flourescent lasers, deep space. There's a brooding beauty to it, and just the palette is enough to make you melt: vibrant oranges and blues, hot and cold, human and machine. The whole twanging guitar thing is greatly downplayed, thank goodness (we're no fans of westerns), and instead there are ominous piano solos. In this respect, Firefly the show is a lot more westerny, a lot less dystopian, and hence we like it less. But the fun characters, their fun interactions, are still enjoyable and so, yes, we ended up watching the entire series not long after seeing the film. 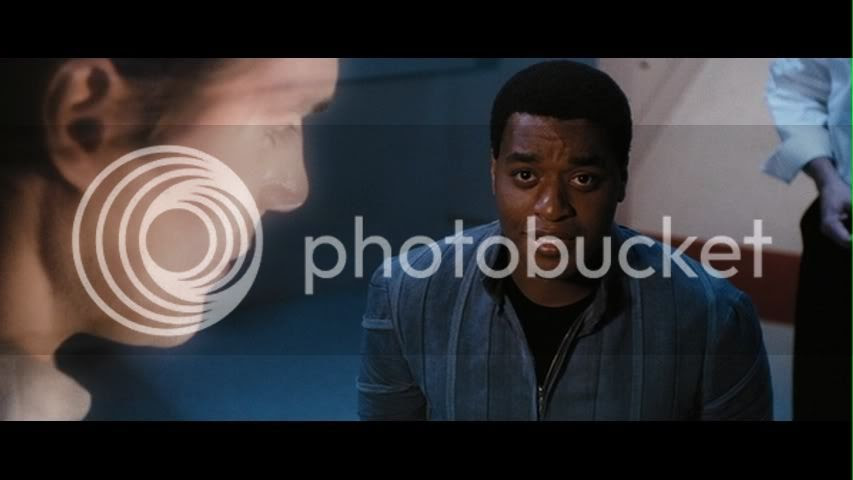 See what we're talking about? The dystopian palette: blues and oranges! 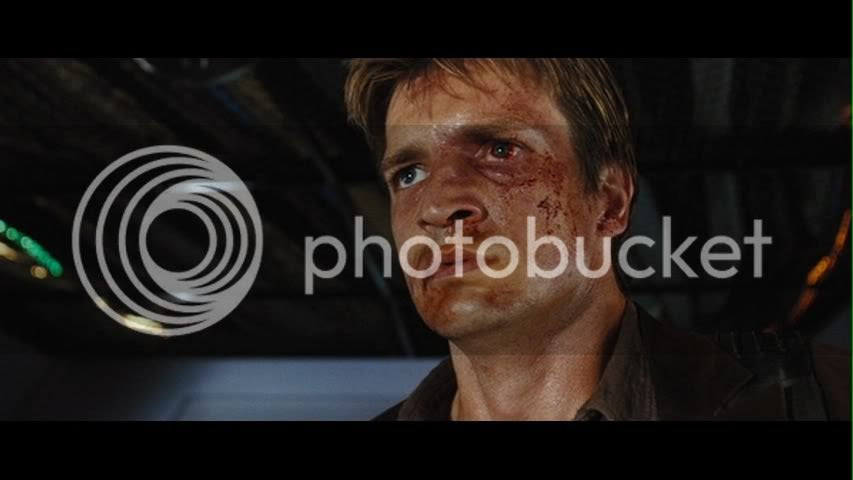 And some pulpy action, too! It's like Alfred Bester on celluloid and with more enlightened gender relations, whee! Couldn't ask for anything more!

At the moment, Serenity and Firefly exist only as a burning passion in the hearts of the series' rabid fanbase. (A fanbase described by actor Nathan Fillion as "very Jehovah's Witness.") Indeed, the power of this fanbase was enough to get Universal Studios to fund the production of Serenity and there is much hope and pining for a sequel. The PPCC would like to join this tormented, Heathcliffe-style waiting, as it really is just so darn fun as a story that we too want - no, no, NEED - more. If we may also make a tiny suggestion for the sequel: pleeeaze have Chiwetel Ejiofor again, as he was ace.

(Also, we can thank the fanbase for providing some reading material in the interim: fantasy author Steven Brust has published a Firefly fanfiction novel under a Creative Commons license. This interesting nugget found onBoing Boing, Provider of All Things Interesting.)

Posted by a ppcc representative at 05:10

I just have to say that I lovelovelove this movie! Thank you for your insightful review--I have even more to think about now.

My fandom doesn't extend to Browncoat membership, but I did watch the show first, and really enjoyed the humor. I think the Western style speaking with random Chinese phrases interjected is absolutely hilarious.

Have you ever noticed that Nathan Fillion sometimes looks freakishly like Vivek Oberoi?
http://bethlovesbollywood.blogspot.com/2007/06/separated-at-birth.html

I saw this most excellent movie having never laid eyes on 'Firefly' and came away :) I was wondering where I saw this captain before and you just reminded me that it was Han Solo (in an alternate universe maybe?). I have 'Firefly' on my long-assed Netflix queue and will have to quit my job to catch up to the damn thing.

Jayne was the bodyguard from 'My Bodyguard' - one of my fave films of all time. If you liked this you should check out the reboot of 'Battlestar Galactica' which is not only the best sci-fi series in history but one of the best shows on tv period.